“Remember when we went to Canada a few years ago?”

“Yea! That was so much fun! We should do something like that again.”

“For real! Where should we go?”

And that’s how this crazy road trip came to be. Or something like that. My friend Janine and I decided to take a long weekend to trek down to music city in hopes of grand adventures and unknowingly meeting an upcoming country star.

I didn’t have many expectations for our journey — we didn’t do a whole lot of planning. We knew the first night, we would drive out to Pittsburgh and spend the night with my best friend, Allegra. On the way home, we planned on spending the night with one of Janine’s friends in Kentucky. Oh, and we were going to go skydiving. 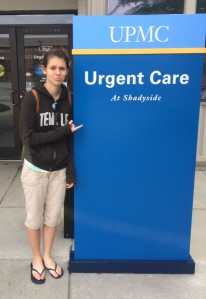 The first day of the trip everything went fairly smoothly. We made it out to Pittsburgh in good time and got to see Allegra’s beautiful smiling face 🙂

The next day however… I had a great time catching up with Allegra and our friend Tim who dropped in for a visit. But I ended up in the Urgent Care at UPMC because we were somewhat paranoid about strange bites I had on my arm. When we got the hospital, I couldn’t find my phone. Janine and I both searched the car inside and out, but still couldn’t find it.

Fortunately, the hospital and missing phone both turned out alright, and soon we were on our way (fingers were crossed that those incidences would be the end of our t 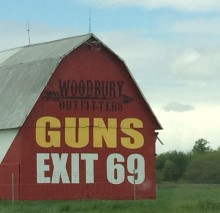 We cruised out across Ohio, blasting our favorite tunes and having deeper conversations than I expected. I can only speak for myself, but I was pleasantly surprised by our conversations and felt like I got to know her a whole lot better than I expected to. We had serious conversations, all while good-naturedly making fun of what we drove past (like what we saw in the photo on the left 😉 ) 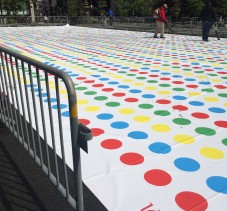 To break up the driving (it was going to take us about 8-9 hours to get to Nashville from Pittsburgh), we decided to make a detour in Cincinnati. Why? Because it was the biggest city on the map that we were passing through, and it sounded like it might be a cool place (we used some pretty awesome logic on this trip, I know).

Turns out Cincinnati is actually a really cool place — well, aside from the Reds Stadium. In one of the main plazas, they were setting up a GIANT Twister mat for an event that 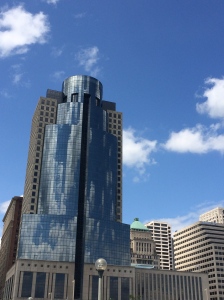 night. How cool is that!? I was tempted to stay until it started just because it looked so fun 😛

Janine and I wandered around, without any idea of what to do. I think we both wished we had more time to spend there. The hour and a half we explored was not enough. The weather was gorgeous and it was refreshing to stretch our legs.

The coolest thing we stumbled upon (for me, anyway) was the National Underground Railroad Freedom Center. We saw signs for a Berlin Wall memorial, which we became determined to find. When the police didn’t know where it was (yes, we –Janine– just walked up and asked a police man we ran into), we used our phones like normal 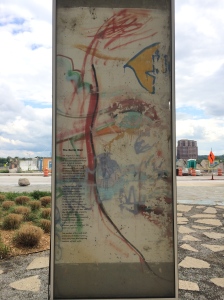 people would. Instead of finding the memorial, we found the Freedom Center. Thinking the Berlin Wall memorial might be inside, we poked around a bit. After perusing the gift shop (the only part free to the public), we headed back outside.

Finally, I stumbled upon the memorial. It was strange to think back to the little that I do know about the Wall and what happened in Germany during the time it was erected. The stones leading up to the wall (you can kind of see them in the bottom section of the picture to the right) all had different words related to injustice. “Indifference” hit home with me most. How many issues of injustice am I indifferent to? More than I’d care to admit. It was a somber and reflective experience. 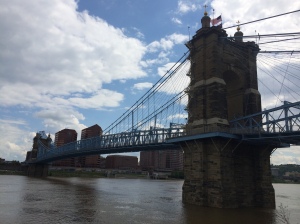 As Janine and I were walking around Cincinnati, we past quite a few homeless people holding up signs asking for money, food, and things like that. We both did our best to keep walking and ignore them. There was one man we past on our way back to the car who stuck out to me. He was holding a sign simply asking for a blanket. As we past him, he asked us if we had a spare blanket. Instinctively, without even thinking about what he asked or my response, I said “no” and kept walking.

Fortunately, he was still there. We gave him the choice: my sightly bigger red Montco blanket or my double layer pink fleece which was a bit smaller. He chose the red one. We gave him a bag of pretzels we had in the car as well since we figured that we probably the hardiest food we had packed. The man seemed surprised that we came back.

I would be too. We weren’t very friendly the first time we met him.

It was so easy to condemn the people who were indifferent and who allowed the injustice to survive around the Berlin Wall, that we just visited an hour before. Yet when we come face to face with injustice and suffering in our own towns it is so easy to over look. I was so caught up in myself that I immediately dismissed the man who reached out to talk to us and didn’t bother to listen to what he had to say. I am so thankful the man was still there when we pulled up in our car. It gave me a small chance to make part of my indifference right. It was a horrifying realization to see how callused my heart can be. I hope and pray that I will take this experience and it will loosen the indifference I hold onto.