Recently, I’ve been asked a few times how long I have been practicing yoga. My answer? Oh, about a year.

When I stop and think about my answer, I can’t believe it’s been that long. 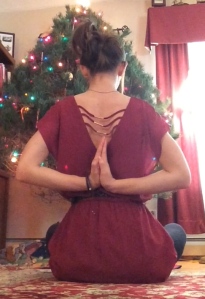 Before I started practicing yoga, I had never really given it much though — and I was definitely a bit skeptical. My only exposure to yoga had been 15 minutes in a college fitness class, and my friends raving about their hot yoga classes. I decided to try out one of these hot yoga classes I heard so much about, out of curiosity but also out of a simple desire to see my friends more often.

That first yoga class was a memorable one. It was a wintry night, and the class was almost canceled due to a snow storm. With a smaller group of students than usual, I definitely stuck out as a newbie. But the teacher was welcoming and understanding that I knew very little about yoga. It was a hot yoga class, which meant we practiced vinyasa yoga in a room heated to around 90 degrees. I found it slightly amusing that it was freezing outside while I was sweating indoors in my workout shirt. I think I was more sore after that first yoga class than I had ever been (well, except maybe after a brutal day of snowboarding).

After that class, I was hooked. Not only was it a great work out and physically challenging, but I was energized yet relaxed when it was over. My busy mind needed a break, which the peace of yoga class offered.

I continued to attend hot yoga classes when I could — but it did get expensive at times. As silly as it may sound, yoga challenges on Instagram also were key to pushing my yoga practice to a new level. I never had a daily yoga practice, but month-long Instagram challenges forced me to practice every day, even if it was only for five minutes. These challenges also exposed me to asanas (poses) that I couldn’t believe were humanly possible, and showed me that I’ve barely scratch the surface of world of yoga.

Now — a bit over a year later — I can’t believe how far I’ve come. A year ago never would have guess I’d be able to do some of the asanas I’ve worked into my practice. I never would have thought that I would practice yoga daily (a recent habit I’ve been developing). And I never would have dreamed that other people would ask me for advice about yoga.

If you are considering pursuing yoga, here are a few tips I’d give:

After a year of yoga, I can definitely say that I’m glad I went to that first class. In an upcoming blog post(s), I’ll share some of the benefits I get from yoga and the lessons I’ve learned — and there’s a lot! I realize yoga might not be for everyone, but I say at least give it a shot. After all, that’s all I did.