We place a high value on looks.

One bad hair cut can devastate someone (especially on the first day of school, or so I’m told). I’ve seen girls spend hours on their hair or know others who cringe at the thought of leaving the house without doing their hair.

But recently one of the girls, Arianna, in the church small group I work with took a big step to shave her head to raise money for and awareness of childhood cancer. To see such determination to help others in a way that goes against the grain of female ‘beauty’ was incredible. I’m not sure what the final number was, but I believe she raised $1,500 that will go toward childhood cancer research. 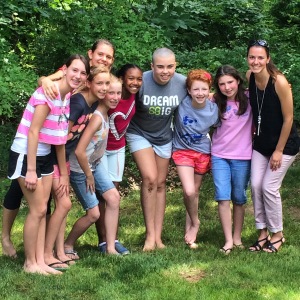 We all gathered around the pavilion as a friend volunteering as a hair dresser started to brush Arianna’s hair. Not only was she shaving her head to raise money and awareness, but she had decided to donated her long, brown hair. She shed a few tears as the woman started to cut her hair off and then brought out the razor — but she’s never looked prettier.

Arianna glowed, inwardly and outwardly. She has a beautiful soul. She is courageous, strong, compassionate, and can rock a shaved head better than anyone I know.

Watching Arianna’s selfless sacrifice was humbling and made me think about the value I place on my own looks. I’ve donated my hair multiple times, but I don’t think I could voluntarily shave my head. She is an inspiration to me, and it’s an honor to be able to have her in my life.