Before we even get into this post, let’s define what feminism is and make sure we are all on the same page:

fem·i·nism – noun: the theory of the political, economic, and social equality of the sexes. 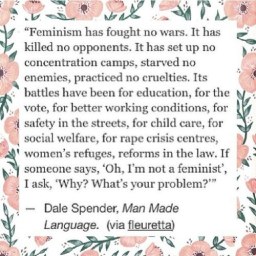 I used to see feminism as a dirty word. It was for all these liberal women who didn’t realize that women already are equal to men in our country.

But as I started reading and learning more, I began to see how flawed that view was. Women are not equal. It was less than 100 years ago that women gained the hard-won right to vote. Well, most women. It took even longer for black women and Native American women, due to discriminatory practices.

That’s not really that long ago.

And everything has been hunky dory since then? Yea, right.

Even if you don’t see it in your life and you feel equal to men, doesn’t mean that there still isn’t a problem.

Here are just a few reasons we still need feminism:

1.  1 out of every 6 women will be a victim of rape, either attempted or completed rape. That statistic do not include sexual assault other than rape. I bet you know women who have been groped, grabbed, or touched inappropriately, whether you realize it or not.

2. A new study found that girls as young as 6 years old start to think boys are smarter than them. Maybe the issue with women in STEM fields isn’t an issue in college, but one with roots that start much younger. (Here’s a different take on the same study that maybe it’s the boys’ perspectives that actually need work).

3. Women make up more than half of the population in the United States yet hold less than 20% of the seats in congress.

6. We still have a culture that blames victims for sexual assault. (“Why couldn’t you just keep your knees together?”, “She looked older than her age”, “You did a lot of partying in college, right?”, “Women should avoid dressing like sluts in order not to be victimized.” And FYI those statements were all made people people in respected positions — judges, lawyers, police officers. And here are just a few other examples where men and women blamed what the woman was wearing instead of the actual rapist for the assault).

7. In a domestic abuse case, people more often ask, “Why did she stay?” instead of, “Why did he abuse?”

9. Dealing with catcalling, leering, and being afraid to walk home alone seem to be just part of being a woman rather a larger problem with our culture.

10. Because women are still judged, discriminated, and rated on their appearance (this woman was fired for being “irresistible”, and the courts ruled it legal).

11. There’s still a pay gap (even among millennials, before we start popping out babies). Obviously, there are other factors than just gender at play here, but if you think it’s because men work harder than women, I’d say that’s pretty sexist. It’s also pretty clearly an issue in Hollywood.

12. Dad bod is hot but you’ll rarely hear about a “mom bod.” Another double standard when it comes to beauty standards.

13. There is a stigma to women traveling alone that doesn’t usually exist for our male adventurer counterparts (and victim blaming goes to a whoooole other level).

14. Because there are times when I feel like saying the word “feminist” would be more offensive than dropping the f-bomb.

“I think every woman in our culture is a feminist. They may refuse to articulate it, but if you were to take any woman back 40 years and say, ‘Is this a world you want to live in?’, they would say ‘No.’” — Helen Mirren

But women have it so good in America, especially compared to other countries.

Internationally, there are a whole other host of reasons feminism is needed:

And for the record, being a feminist doesn’t mean you hate men. I love men. 😉

It doesn’t mean that you think women are a superior sex.

It means that you want women to have equality.

Now, I am proud of the label feminist.

“I’d like every man who doesn’t call himself a feminist to explain to the women in his life why he doesn’t believe in equality for women.” – Louise Brealey

Feminism isn’t just good for women. It’s good for men and for the culture as a whole. Feminism isn’t trying to take away men’s rights. It’s trying to give women the same rights and chances that men have. 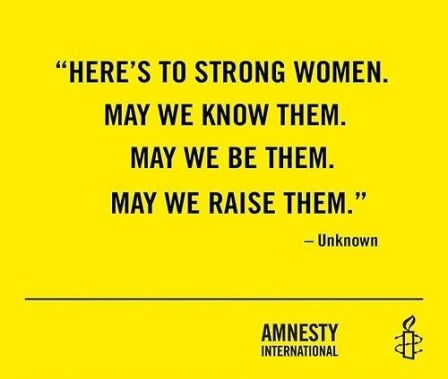